In Photos: Gameela in 2011 elections 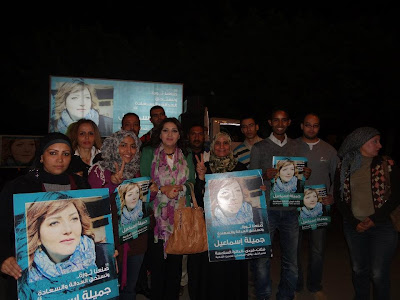 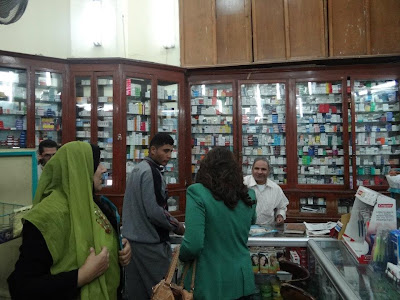 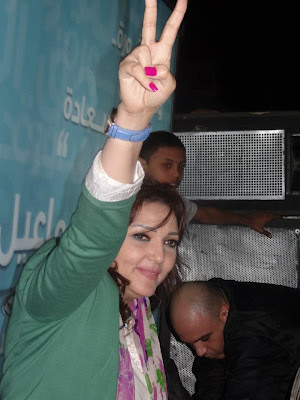 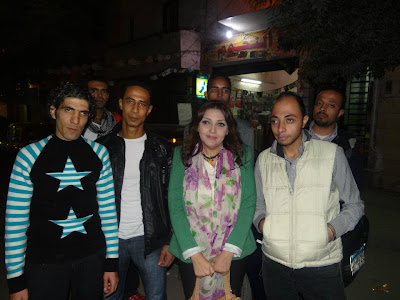 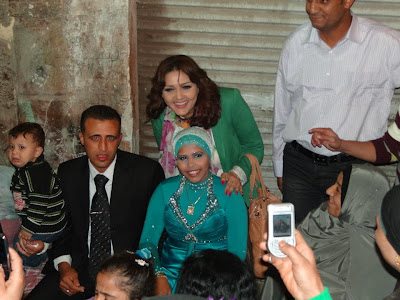 Posted by BloggingEgypt at 3:28 AM No comments:

Gameela was featured in this week's Newsweek Magazine in an article called 'The Women's Revolution.' Find an excerpt of the story below:

A ripple suddenly runs through the crowd. The commotion announces the arrival of Gameela Ismail, a TV presenter turned activist and politician. Ismail is the ex-wife of Ayman Nour, who in 2005 contested the presidency and then served five years in prison on what his supporters say were trumped-up charges of forging party-member signatures. (Ismail also used to work for Newsweek as a Cairo stringer.) While her husband was in jail, Ismail emerged as a leading voice of opposition to the regime—and paid the price. She was harassed, attacked in the media, and banned from work.

Ismail ran for Parliament in the elections of 2010 and was soundly defeated by a businessman affiliated with Mubarak’s National Democratic Party. But, she says, “I didn’t lose because he was a man and I’m a woman. I lost because I was with the opposition and he was with the ruling party. I lost because he had access to the security agencies and to the workers inside the polling station.” The elections were widely condemned as fraudulent, and the Parliament they brought to office was dissolved soon after Mubarak’s ouster.

Today, Ismail is back on TV—and back in politics. This fall she will run for Parliament again, likely as part of a coalition of liberal and left-wing groups. She admits that female candidates face the same problems as always—social prejudice, a lack of party support and funding—but is nonetheless optimistic. The revolution is a lesson for women about what they’re able to accomplish, she says. “We, as women and feminists, failed to get our rights. But we were able to get freedom for the whole of Egyptian society. We did for Egypt what we couldn’t do for ourselves. We were in the front lines of the revolution. And I am so proud—as a woman and a citizen.”

Around her, the slanting afternoon sunshine illuminates the busy, dusty square with its piles of garbage, its jerry-built entertainments, its poor, curious, and cheerful crowds. “If we want to be in a better position, we have to put in the effort,” says Ismail. “I don’t expect the military council to hand out privileges and roles to women. I don’t expect the interim cabinet to come looking for us and ask us to participate. But I’m not waiting for an invitation.”

Read the full article here.
Posted by BloggingEgypt at 1:58 AM No comments:

Gameela one of '100 Moms Changing the World'

Gameela was recently chosen as one of 100 moms who are changing the world by Babble.com. Here's what Babble had to say about Gameela:

Gameela Ismail stands at the forefront of Egyptian women fighting to create a new country in the wake of the world-shaking revolution that took place this past January. Ismail has long been a fearless, outspoken advocate for justice. She was forced out of her job as a TV presenter when her then-husband husband, Ayman Nour, became the first person to challenge Hosni Mubarak for the presidency in 2005. When Nour was imprisoned following his loss to Mubarak, Ismail and her children took to the streets, chanting, “Down, Down, Hosni Mubarak!” at a time when doing so could have cost them their lives. In 2008 government thugs set her husband’s party headquarters on fire — while she was inside. Ismail escaped, but was pressured into dropping charges when police told her she was the prime arson suspect. Since then, Ismail has evolved into a public symbol of the fight for democracy in Egypt. She ran for parliament in the 2010 elections and is planning to run again during the country’s first free elections this fall.

To find out more or read about the other moms, go here.
Posted by Gameela Ismail 2010 at 2:25 AM No comments:

Before it became too crowded in Tahrir Square on July 8, there was a huge debate amongst the people in the people. They asked, "Who is still at Tahrir? They look like thugs and not the usual revolution youth!"

It was a question that needed to be investigated by E’adet Nazar. So I went and met many people in the square, and we talked and discussed the whole issue.

What I discovered in the square was that, as usual, the demonstration was a spontaneous gathering. There were no leaders, no certain people, and as always there were various segments spanning the spectrum and classes of Egyptians.

It is very difficult and unfair to judge these people only on their appearance, or because they have a different way of expression than we do. There are well-educated people from the middle class – which were called the ‘Revolution Youth’ – with political movements; youth who were politicized even before the revolution. And there are excited young people ready to confront any form of authority.

Of course there are some roaming vendors who wish to sell a cup of tea, bowl of koshari or grilled corn to all these people. But there are also the poor, oppressed and subjugated people, with nothing to lose.

Tahrir Square is their last hope.

Those excited youth willing to break any rule are bound to the group of activists who see the sit-in as the key that brings our rights and quick decisions from the military council; with them is the ‘No to Military Trials’ group, of which the poor people were the first victim, who continue to suffer, their right to be tried before their natural – civil – judiciary taken from them.

Some oppressed and subjugated people were turned into criminals by police torture and humiliation. Their revenge is expected – as long as these practices are still used by the police, even after the revolution. Yes, it is less now, but the idea of a comeback is terrifying.

We have to know that the rage of the poor people must be confronted with real social justice. Otherwise, it will explode again; particularly because there are still some cases of torture in police departments, and this is the main source of oppression.

After the revolution, there is no way to compromise between security and freedom, nor between stability and respect for the rights of citizens. That kind of talk is over.

Justice for all people is their security. The decisive change and response to the demands of the people is the way of justice and security.
Posted by Gameela Ismail 2010 at 11:57 AM No comments:

On my way to Tahrir Square

On my way to Tahrir Square, the taxi driver began a conversation by asking, “Why are there still people sitting-in at Tahrir?”

After Mubarak’s fall, there became a division among the people about the continued sit-in at Tahrir Square. One side said, “I didn’t feel any change. Back to Tahrir.” The other side said, “Who is still there? Why?”

Tahrir Square has always been symbolic. Sit-ins before the revolution were an expression of extreme rage and protest against the ruling regime. The groups who demonstrated on the 25th and 28th of January were moving from everywhere to Tahrir Square, and the sit-in from January 28 until February 11 was a true symbol of persistence and resilience until Mubarak’s fall.

Adding to the debate supporting the benefits of the Tahrir sit-in, a new debate arose about the “strange people” in the square. There were claims that these were not “revolution youth.” People said they looked like “thugs,” and there was evidence to support the theory: a new wave of violence in Tahrir and near the Ministry of Interior on June 28.

Still, some defended the demonstrators, saying, “Accusing them of being thugs is an insult to the poor and a distortion of the revolution.”

Thus, E’adet Nazar will try to find answers in Tahrir Square and discuss the issues with you during our show on Friday, July 8 at 11pm on al-Nahar channel.
Posted by Gameela Ismail 2010 at 12:00 PM No comments:

Gameela on BBC's 'Sisters of the Revolution'

Welcome to Gameela Ismail's blog. Here you will find information about Gameela and her campaign for Parliament in both English and Arabic.